Variety is the spice of life, or so goes the saying. Of course this extends to our viewing habits. With over 370 TV channels available on Sky and even as much as 70 on a basic Freeview package, the whole gamut of human interest is covered. But how does this linear programming behaviour extend to video on demand and does this pose a potential problem for the latter?

In terms of the types of programming available on such services as Netflix and Amazon Prime, it is safe to say that actual content is not an issue nor is the practicalities of VOD software. Their huge library of content is sure to satisfy a large proportion of those linear users. Indeed their intuitive related content matching also means it is actually easier for users to find more programmes they may find interesting. However, this is not taking into account a more potentially troublesome determining factor for streaming companies; unique genre behaviours.

Not only are the types of content we want to watch completely different, we’re all different in terms of how we want to consume that content. Although to focus on generalisations too much is a dangerous game, much research has been undertaken to determine particular genre demographics. As an example, it would be fair to say your average Sky Sports package holder is likely to sit in a different demographic to those who subscribe to Met Opera on Demand.

As we can see from the below graph, average streaming usage can vary drastically on fundamental demographic features, like age. 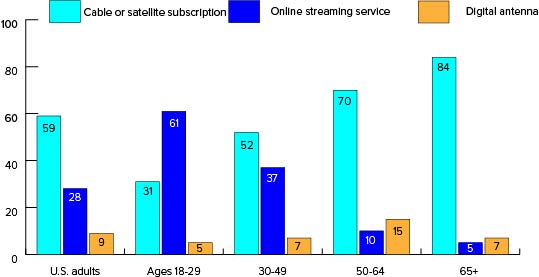 Although this is an issue which is of great consequence to every genre involved with content streaming, perhaps sport is its largest challenge. This could said to be the case on purely rights fees alone, with the latest Premier League football rights selling for over £4bn.

As part of those latest rights packages, a streaming service managed to nudge its way into the market previously dominated by Sky and BT, with Amazon securing 20 matches per season from England’s top league. In addition to this, Eleven Sports had previously successfully claimed the rights to La Liga in the UK and Ireland, ending Sky TV’s 20 year association with the Spanish top flight.

However, just months into this agreement, Eleven Sports were looking to renegotiate its rights after failing to secure a sub-licensing partner with a TV broadcaster. A spokesman stated: “Without carriage agreements with the existing platforms, alongside the challenges posed by rampant piracy, the market dynamics in the UK & Ireland are very hostile for new entrants.” Could this provide a warning to major streaming services before they invest heavily in sport? Or does the brand cachet of an Amazon or a Netflix render this a non-issue?

That Eleven Sports quote also makes reference to a perhaps unquantifiable complicating factor that is at the heart of all sport broadcasting; illegal streaming. A study undertaken by the BBC with football fans showed that over a third of respondents regularly watch Premier League games on illegal streams. Although recently the Premier League has taken a special focus into eliminating these services, their existence will prove a thorn in the side of legitimate streaming companies. With users asking: ‘Is this the same service I can get for free elsewhere?’

Despite this potentially troubling issue, it may also be fair to say that there is a silver lining to this cloud. If such a large proportion of users are accessing streaming services illegally it surely proves there is an appetite to watch this type of content in a non-linear fashion?

Questions such as these are surely something we are going to see answered over the coming years, with the potential riches of disrupting a genre’s market place too tempting to leave untested. Streaming giants are ready to dip their toes into the water, but are there sharks beneath the surface?